One of the blogs that inspired me to start this one The Githyanki Diaspora does this thing they call Situation Mining.  That is, take something, be it an actual RPG module, a TV show, whatever, and distill the core tensions down to a playable situation, typically for Burning Wheel.  Add in a few pre-burned characters with Belief guidelines to tie the situation together, and, ideally, you’ll end up with an almost ready to go BW game.  I really like the idea, and they say imitation is the sincerest form of flattery, so I figured I would give it a shot myself!

I’m starting with the Pathfinder Adventure Path “The Mummy’s Mask”. 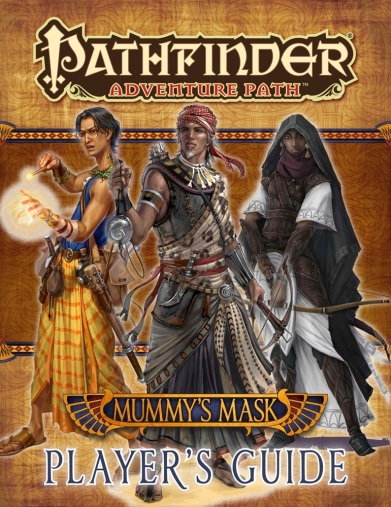 Let’s take the description from the link above and trim it down a little bit:

The ancient lands of Osirion are blanketed by the sands of time, and eldritch secrets and vast riches lay just beneath the sun-blistered surface. As modern Osirion opens its vaults and tombs to outsiders for the first time in centuries, many of these lost treasures and secrets are now emerging—some more troublesome than others. [Meanwhile] a cult worshiping [a supposedly risen Pharaoh] as a god-king grows in the heart of Osirion.

That’s the situation right there, outsiders are being allowed into ancient burial sites when they haven’t been for centuries. How are people going to feel about that? What terrible secrets could these tombs hold that might have repercussions in the modern day. More importantly, who knows about those secrets, and what will they do to stop (or ensure) those secrets come to light? The cult is a wildcard factor that can either fade into the background as flavor, or be a major piece of the puzzle depending on the PCs beliefs – do they belong to the cult? Do they wish to see it destroyed? Do they think the cult’s ‘risen Pharaoh ‘ is the real deal (in the AP he is, but what about your game)?

I also really like Wati. ‘The Half-Dead City’ is the setting for the first part of this AP. An ancient plague wiped out so much of the city’s population, that the whole old city was walled off and consecrated as a grand tomb for the dead. Thanks to the resilience of the survivors (and its important economic location at where the Asp joins the Crook to form the River Sphinx), Wati was rebuilt around the old city. Today, the Necropolis still takes up a full quarter of the city, and the city is known for its funerary tools and rites. Not only does this city tickle my fancy in general, but it is the perfect place for this situation. The tombs are a HUGE part of the city’s culture and heritage, and are literally right next door. It is a great place to start the AP, and a great place to set your game. The AP also includes a flying Pyramid. I believe this serves as the final dungeon in the AP. I just think the concept of a huge Pyramid that’s defense against tomb robbers is magically flying in the air is pretty neat. It is a cool bit of fluff, and a delicious complication to put the thing the PCs need in there.

The AP also has the rights to explore the tombs being granted by lottery overseen by the priesthood of the goddess of death so that it is fair. Bo-ring! Keep it in the hands of the priesthood, but cut the lottery part entirely (it is really just a device to get the Players to go to the tombs the AP wants them to when it wants them to).  Make it based on the ‘will of the goddess’ (read: the favor of the priesthood), for all the fun wheeling and dealing that implies.

I actually see two really good potential games coming out of this situation. The first is the more obvious PCs as those who wish to venture into the tombs for their own profit. Where they have to either deal with the interference of the church and the nobility who have conflicting aims on what they want to be found, or work outside they law in their tomb-robbing. The second is casting the PCs AS the nobility and clergy of Wati, trying to use the secrets (and wealth) of the tombs to advance their own position, while stopping rivals who would like to use their family’s own dark past against them. I ended up going with the first idea for my burns, but if you come up with PCs for the second idea I would love to see them!

Every character I burned up for this game is a penniless, 3 LP, novice. Most were done in Charred, a really sweet online character burner, but the Spirit Binder and Cultist were not due to using some Codex stuff, which is why their sheets look different. Each PC’s first belief should be about what they hope to gain by venturing into the tombs of Wati. This can be wealth, but it also can be knowledge about the past, an heirloom they must recover, or secrets they want to bring to light (or ensure remain buried in the sands forever). Each character also has 2 (or 3 in the case of the Dwarf and Cultist due to special traits) additional prompts to fill out the rest of their beliefs.

The Janissary’s Apprentice (Squire)
Write a belief about…

The Half-Djinn Spirit Binder
Write a belief about…

Mixing mythologies a bit here, but it seemed like a cool application of Fey Blood so she can be Pre-Immanent for her Spirit Binding. Plus the players guide for this AP says there are Genies out in the Osirion deserts, so it fits the world, if not the mythology. Also, if you do not have a MaBu/Codex, here is a traditional sorcery version (albeit done in 4 LPs and using a few codex LPs).

The Cultist
Write a belief about…

The Con Artist
Write a belief about…

The Dwarf Adventurer
Write a belief about…

If you take these characters and/or this situation for a spin, let me know how it goes!